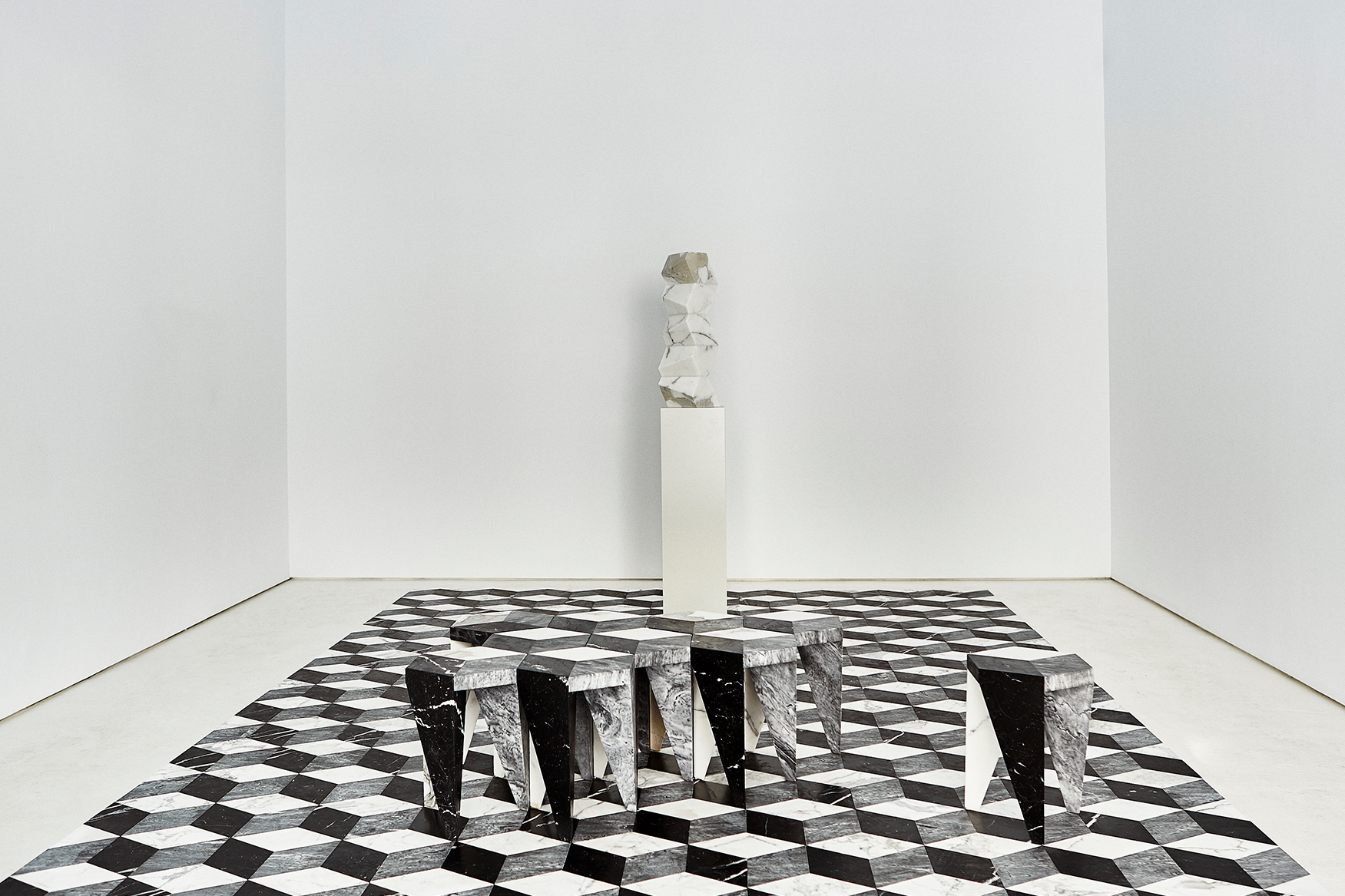 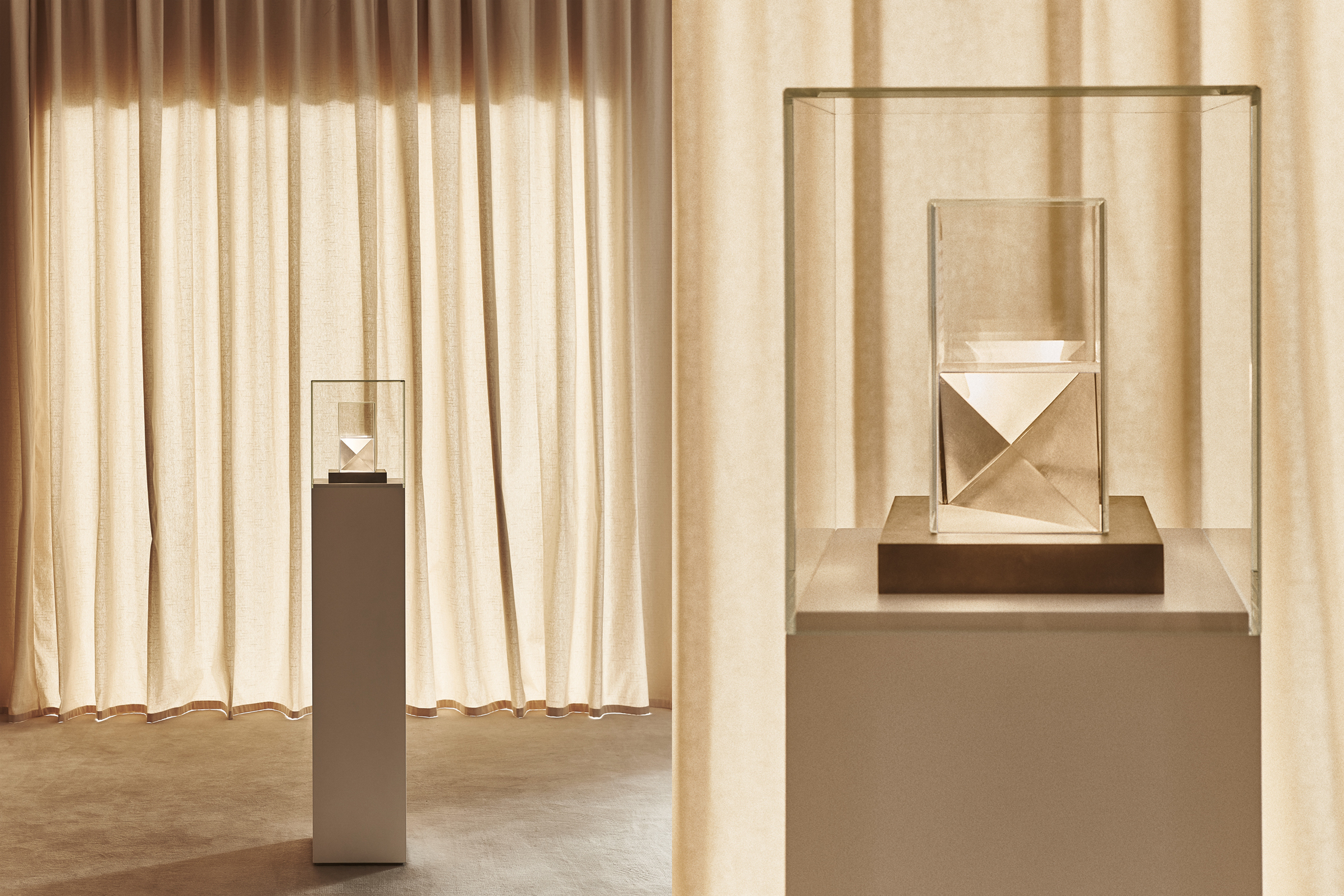 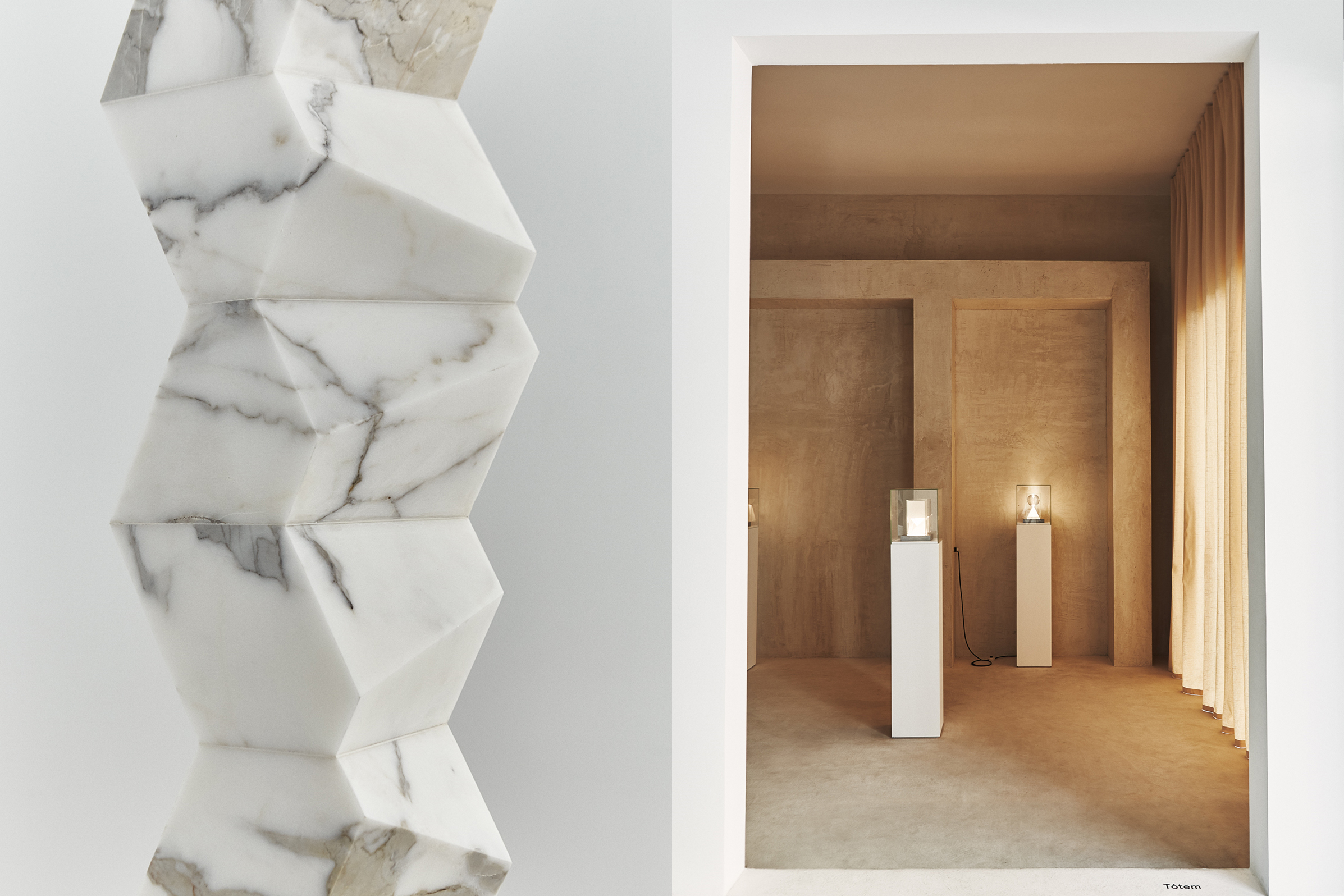 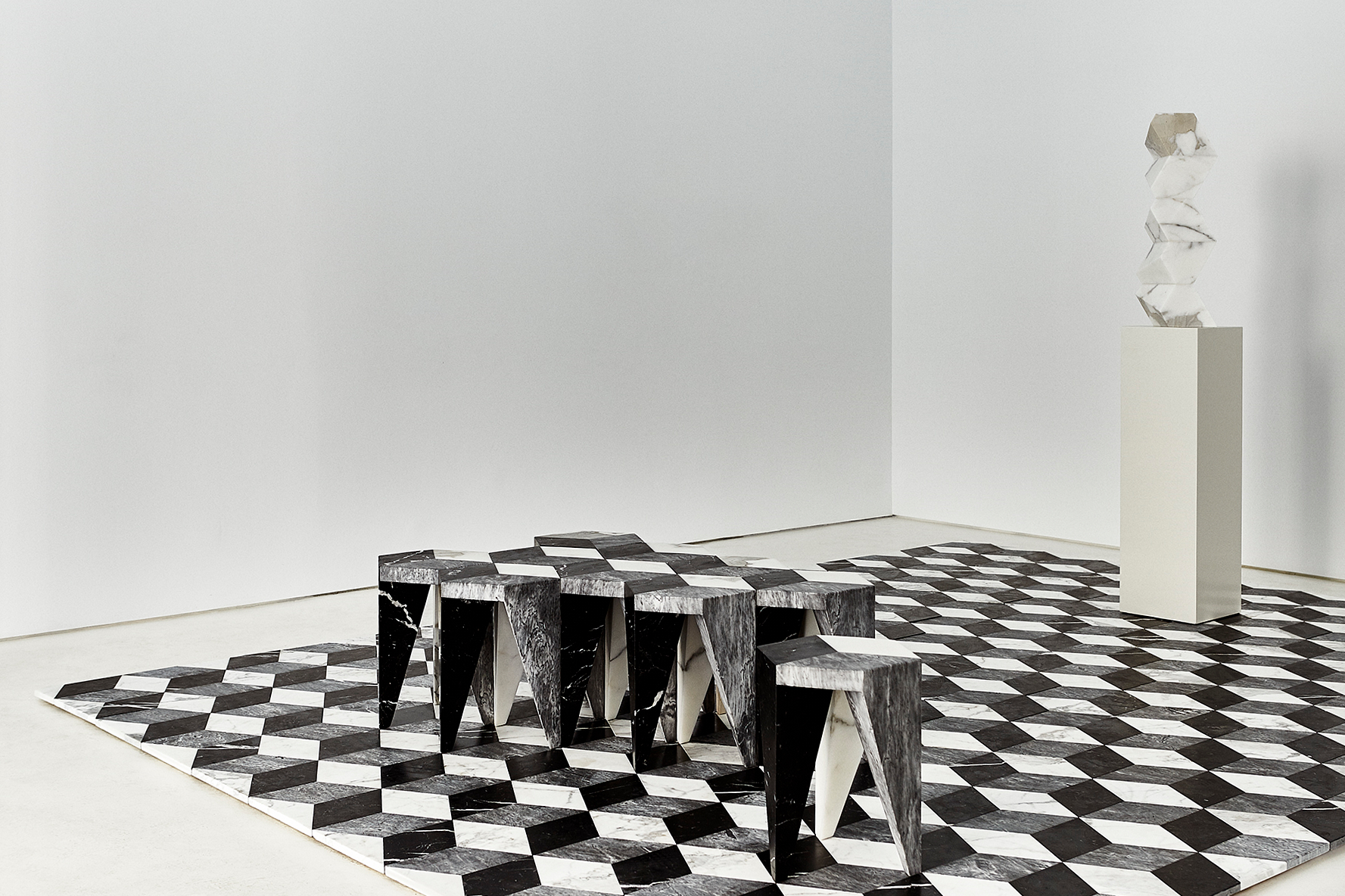 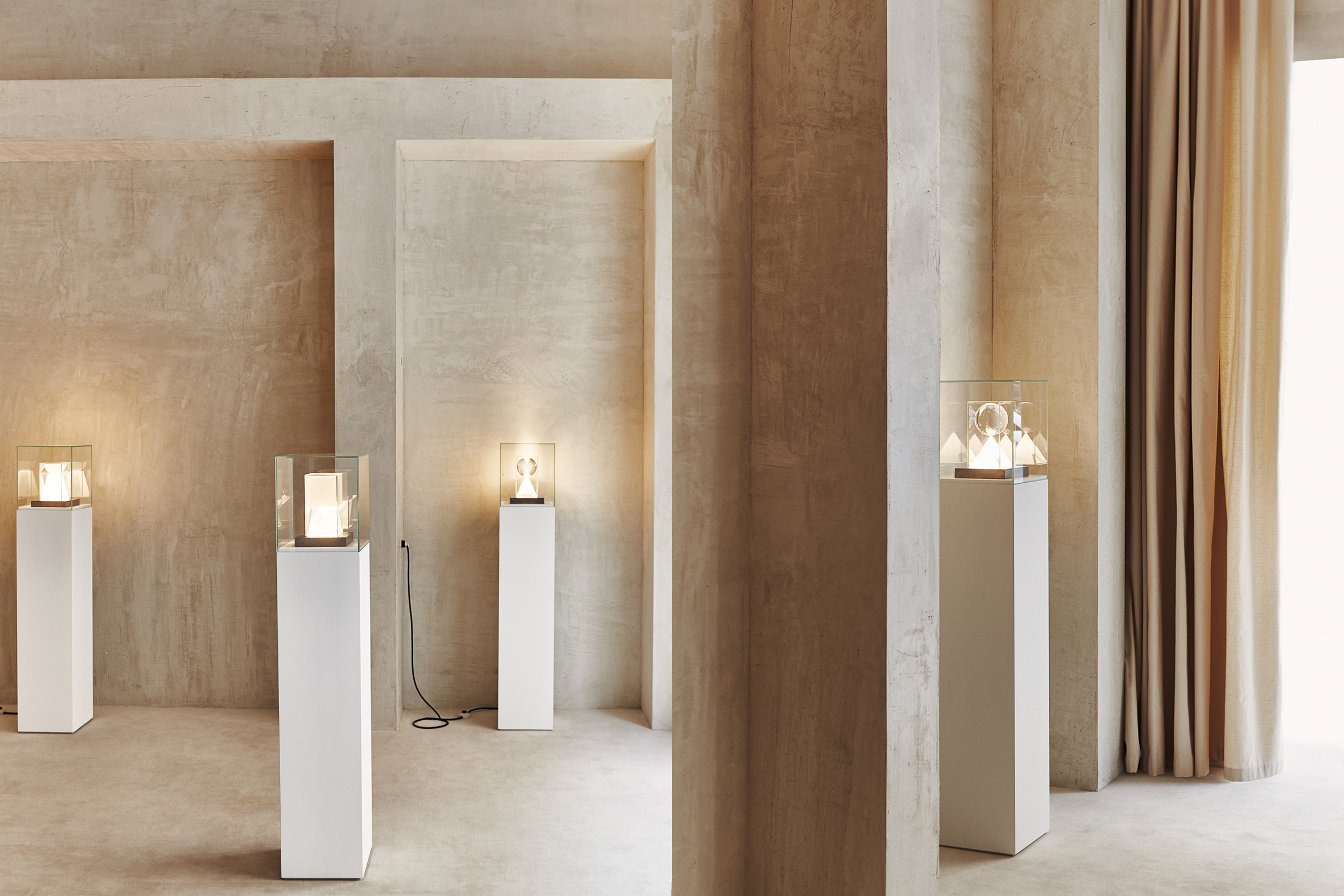 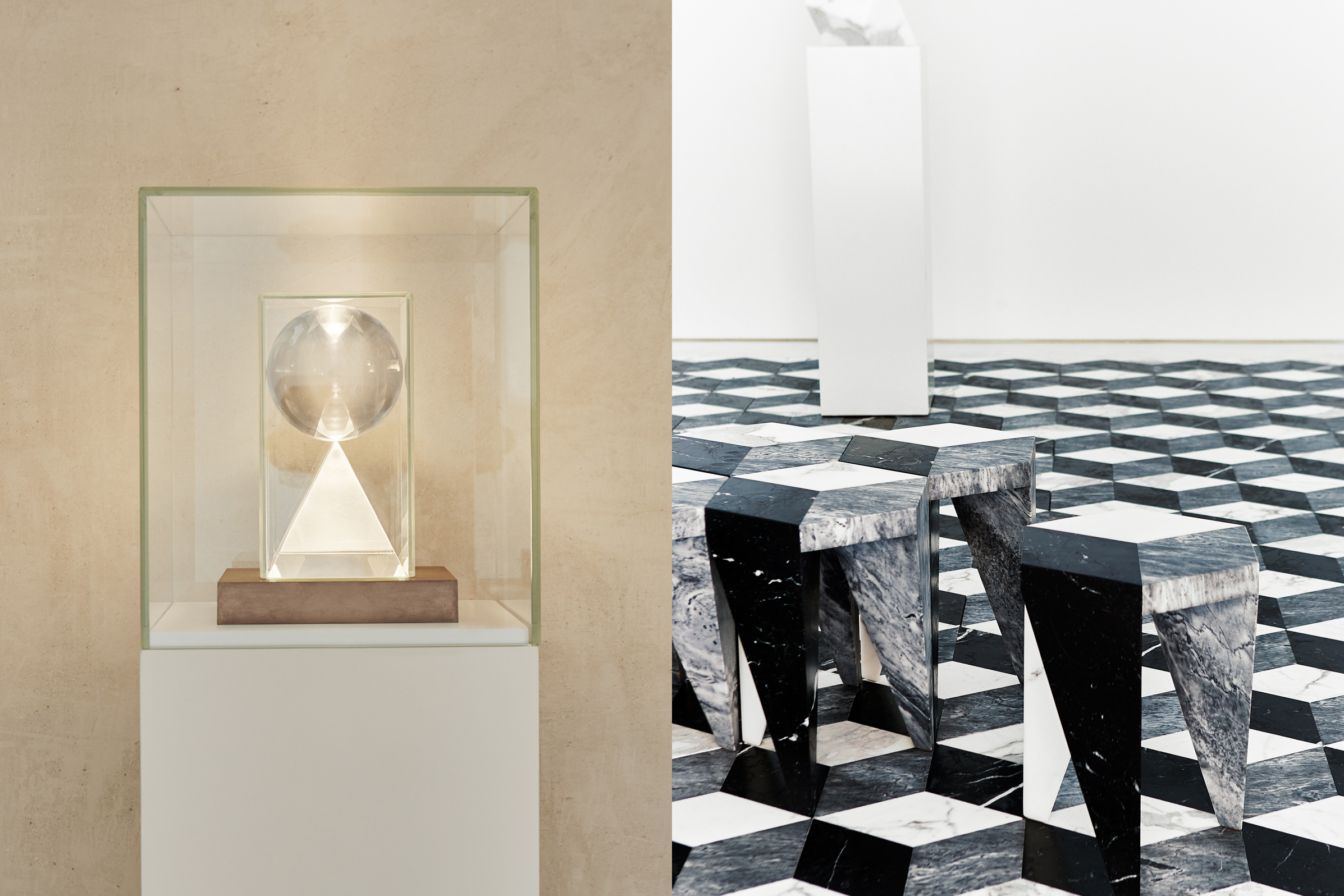 Contrary to what one might think, a designer like Álvaro Catalán de Ocón, who has chosen the path of self-production, from small editions and work on the brink of being handcrafted, never felt tempted to explore this aspect of design, where the freedom is absolute, where there are no potential customers, and where meeting functionality requirements is not mandatory. Therefore, when Machado-Muñoz requested a collection to be edited in a limited series in order to investigate the possible connection between his work and art, Álvaro responded by confronting the task in the most literal way possible, using sculpture as the main character but at the same time, taking a “sui generis” detour to question the sculpture/lamp or sculpture/furniture dichotomies in two projects which were different and had a new point of view along their path. These projects kept his interest in tact in regards to revisiting processes that come from the practice of industrial design and resulted in something unexpected, clever, and surprising at the same time.

In these projects, the designer was invited to transgress, to break rules, to push back borders, to operate at the edge of his discipline, and to invade the paths of art itself. It was a new challenge, and, in Álvaro’s case, it was the first time the ban was lifted, the first time he could take off the corset imposed by his strict industrial design training, which prepared him to provide solutions to specific problems. Imagination is a fundamental ingredient in any process that is as physical as it is mental, to the extent that implementation is almost as important as the piece itself.

This is especially evident in the project, “Rayuela”. The idea came from what were wooden stools with a geometric design and with the same name. These stools, grouped together, form tables with surfaces of varying size and shape, creating a geometrical grid (like the classic floors which inspired it), which, when elevated to the height of a table, give the impression of a floating floor. The pieces of discarded wood from the production always intrigued the designer: specifically, a few blocks with a triangle base but which became a hexagon. He then made a sculpture from them, where all the lines break and then continue, where fullness and emptiness complement one another, where all the textures, rough and smooth, add value. In the new “Rayuela”, this time in marble, the modus operandi was reversed. First, a sculpture was made and then with the scraps, some stools were made to place around the sculpture. It is all shown on a geometric floor with a diamond design, in a kind of a total space loop.
The second project, “Totem” is a group of light sculptures. It too, is a foray into the intricacies of geometry. It is based on perfect pyramids, spheres, and cubes made from transparent acrylic, of dry profiles and clean cuts. When illuminated, the light reflected produces an intriguing play on full and empty spaces, and on light and shadow, which brings us back to the realm of imagination. This aspect is reinforced by the fact that the plinth itself is an integral part of the sculpture, as this is where its essence is located. In fact, here, Álvaro makes another reference to his profession as an industrial designer by expressing his longing for the return of the incandescent light bulb, which is on its way to becoming a thing of the past, with a cable with a switch at the base of the sculpture.
Nothing it what is seems in these two collections, either formally or conceptually. The designer continues twisting the terms, true to his principles.

About Alvaro Catalán de Ocón’s work now being exhibited. These days will be exposed in Madrid, at the Machado-Muñoz gallery, the latest work of sculptor and industrial designer Álvaro Catalán de Ocón. Rayuela, an installation with a stone carpet headed by a column and stools, also of stone. And Tótem, a collection of incredible small lamps made of translucent and transparent methacrylate. Rayuela a carpet? Tótem a collection of lamps? To me they are the carpet and lamps of Aladdin himself, able to fascinate us of how wonderful they are. Read more

On the carpet of precious stones, White, black and grey, stands there, presiding it, a Brancusi’s column that with its beauty makes time stand still. The whitest column, made of white statuary Carrara marble, impresses. And when it’s touched by the light, it acquires a certain sacred character. The author tells us that after lifting the column, with the leftovers, he developed those seats able to compose as a blessed checkerboard, which together create a suspended plane that by repeating the pattern of the carpet, produce a very effective optical effect which raises its beauty to the sublime. After we learned that before, when he was working on these pieces in wood, the process was the other way round: he made the stools starting from a block and with the leftovers emerged the idea for the column. The column is like a white cloud that raises geometrically to the sky as the Bible columna nubis.

We can read in the Exodus, chapter 13.21-22: “By day the Lord went ahead of them in a pillar of cloud to guide them on their way. The pillar of cloud by day never left its place in front of the people.” Like this white marble cloud is the precious column of Álvaro Catalán de Ocón. And the lamps are not lamps. They are sculptures made with light, with only light. What some architects would like to build with our work, this damn sculptor makes it in front of us with some diabolic geometric layouts that make us levitate. At this stage of the game it’s not easy to find something surprising in the world of art. And less if the surprise comes together with the serenity and calm that transmit the works shown to us.

I must confess that I have greatly enjoyed visiting the exhibition. That I found that his magic lamps flew through the air. That his flying carpet carried us to the most universal history. That his column, I don’t know any more if Brancusi’s or Trajan rose until lost in infinity. That his stools were no longer stools but the three fingers of Rodin’s God that lay on the ground.

N.B. I recommend that after marvelling at the beauty of the marble stools, see his version in bronze, with a nearly impossible colours and textures, caress them and be transported to another world, the world of artistic creation whose secret has Alvaro Catalan de Ocón.