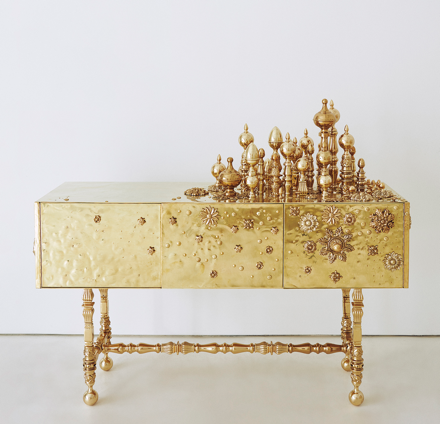 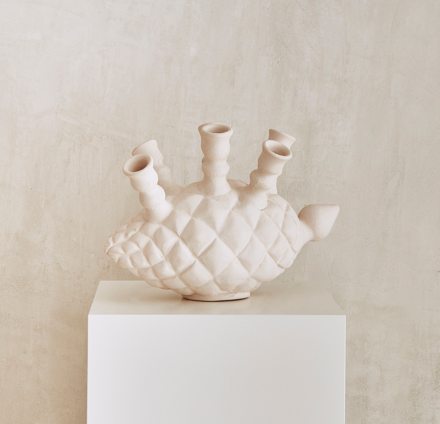 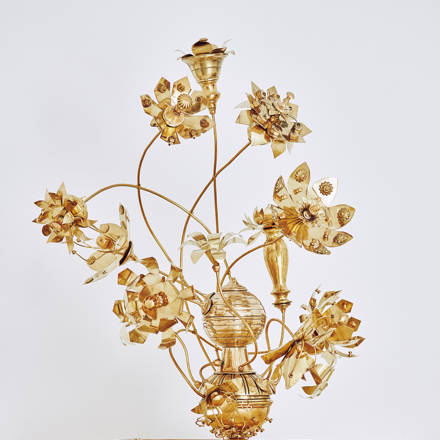 The “Castilian style” and the Spanish “Remordimiento” style are two concepts referred to Spanish furniture deeply rooted in our culture and collective memory which served as a strong inspiration to Von Pelt. From their particular interpretation of Spanish popular tradition, Von Pelt has created, exclusively for the Machado-Muñoz gallery, a new collection of furniture and pottery called “Spanish Brutalism”.
Von Pelt is a collective based in Berlin made up by designers, creative and craftsmen from different countries. Somehow, their members are anonymous, changing depending on the project, which is carried out wherever required by the product. The only name that transcends is that of its founder, designer, and spokesperson, Desirée Mejer.

Their pieces are characterised by the value of the craftsmanship and their uniqueness, made with handmade traditional methods. In their search for cultural roots and the best craftsmen, they worked the brass in tin workshops in Pedraza and found the best potters in Seville. The exhibition includes cupboards/bureaus, mirrors and pieces of pottery that have been created with rich and elaborate “ideological” aesthetics, essentially experimental and laden with irony. The show is formed by two sharply contrasting series, defined by the qualities of their materials: brass and ceramics.
It is impossible not to sense the influence of sacred art and Bible stories in the furniture and mirrors of the “Golden Calf” collection, made of wood, covered with a coating of brass decorated with rich ornaments rescued from hardware stores. However, other influences have intervened in their design, such as the aesthetics of the film Oedipus Rex, by Pier Paolo Pasolini.
Most of the brass pieces were inspired inspired by the traditional “bargueño” -the most genuine piece of Spanish furniture-, and we can observe in them (including some mirrors that could have been rescued from a Mudéjar palace), the excessive golden shine of the yellow brass is remedied by the bumps on its surface. Von Pelt refers us to a visual semiotic in which these projections are “war wounds and scars, as well as jewels from Castile.” Full of literary historical and legendary references, “the chest-unit has changed ownership many times, suffering the bruises of the struggle for its possession. Although in the end these are just distant inspirations and references”, says Desirée Mejer.

The “remordimiento” style and “Spanish fantasy” trigger the reinterpretation of traditional Spanish pottery. The ceramic works, in contrast to the brass, -representing vanitas and mementos mori,- are sober and austere, which is offset by the accumulation of elements like skulls, chains, or jug spouts. Von Pelt takes us to a meeting point of collective memory, where we identify icons of a mythical symbolism in the aesthetics of taverns, El Cid or Don Quixote.
Drawing on a critical historicism, Mejer goes further and tells us that the references in some of these pieces are in the connection between Spain and pre-Columbian America. Ornaments such as pinecones are part of our Roman and Moorish heritage. The spouts-flutes adorning some of them invite us to fill them with flowers, as if they were those tulip vases made especially for tulips produced in Flanders in the 18th century… How have we ended up in Holland? “We are united to the country by wars”. And the bird a reminiscent of Castilian figures of partridges. Ironically, “the chain is a symbol of the cultural unity of peoples dominated by Spain”. The result is a loose association of references from a collective consciousness of what is “Castilian” present in great masterpieces which are both elegant and well-built.

“A taste dominated by Spain’s climate—where white and mud consume it, without any other obligations in the use of colour…” This is how Cecil Beaton describes the Duchess of Lerma’s rooms in Tavera, Toledo in his book “The Glass of Fashion” (Weidenfeld & Nicolson, London, 1954) and it is how I imagined the ideally brutalist Castilian hall, worthy of housing Von Pelt’s works, when I saw them for the first time in the Machado-Muñoz gallery.Beaton (in his foreign perspective) points out the few concessions to frivolity that the Castilian style makes, that purity that is so hard to break from… A few centuries have had to pass for the pieces of gilded brass, gold nails, and thistle-shaped post tops to dare to interrupt the Spanish stagnation in such a brutal yet necessary way. Read more

Only the pure gold of that kind of a tabernacle, taken from a church three seconds before the Revelation, can slip through the thick walls that keep La Mancha cool during a summer’s nap. Gilded brass touched by a ray of light, heat, and silence within this so utterly deserted planet devised by this group of artists. They speak from their unusual desks, from a civilisation beyond ours, with one foot in Pasolini’s Oedipus Rex and the other in the Pre-Columbian cultures that brought them their ceramics. This group has dubbed these vessels that appear to be taken from a Baroque-alien Memento Mori “Fantasía de lo español” (Fantasy from all things Spanish) and it has delivered them into 2016 through a mission to reclaim Spanish craftsmanship for the future world.

Zurbarán, el Cid, and the Duchess of Lerma herself are already reflecting on this set of mirrors that will not end up presiding over a Spanish chamber as I imagined the first time I saw them, but will surely flood wherever they preside with their pure, forceful, and dignified Spanish style in its brutal passages.